The Best Gingerbread Yet!

When I cook a new recipe which I'm not entirely happy about, I often speculate as to what it needs to make it better, but rarely get round to going back and trying the recipe again with the 'improvements'. This time I have gone back to a gingerbread recipe which I tried a couple of months ago, and made the changes that I suggested at the time.

I used half black treacle and half golden syrup, to reduce the bitterness, and increased the ground ginger from 1 teaspoon to three. I also used sunflower oil rather than olive oil, as I thought the expense of olive oil was wasted on such a strong flavoured cake.

For my future reference, I'm going to list the metric ingredients: 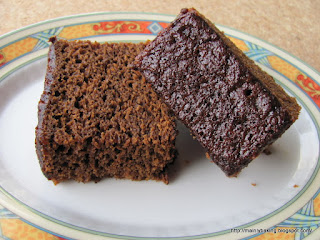 It's another simple cake to mix - the spices are mixed into the flour, and the oil, sugar and egg are whisked together in a bowl. Portions of the flour mixture and the diluted syrups are then mixed alternately into the egg mixture, without overmixing. Baking takes 50-55 minutes at 170C, in an 8"(20cm) deep square tin.

The changes were exactly what is needed. I now have a recipe for an 'old-fashioned' gingerbread which uses oil instead of butter. It's dark and delicious and has enough ginger to produce a tingle on the tongue. It also has the right sort of surface - one that gets stickier with time. I hesitate to say it's perfect, as the batter is too wet to take any additions such as chopped stem ginger - I'm sure they would sink - but it's the best low-saturated fat gingerbread I've made so far!
Posted by Suelle at 08:50

Looks pretty perfect to me, and your description of the sticky top sounds utterly delicious. Good to know your suggested changes made it much closer to your goal of perfection. I do love a good gingerbread.

Great stuff - too much black treacle is a little hard to take. There are plenty of recipes that I intend to go back to but never quite find the time. This proves it's worthwhile.

Well done for perfecting it - it looks delicious.

Good for you, Suelle, there's nothing quite as satisfying as perfecting a recipe..