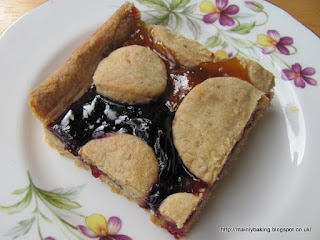 This variation of the famous Austrian pastry, Linzer Torte, was inspired by this recipe I saw on the blog Bake or Break - it looked so pretty! However, I really love the hazelnut pastry that Delia Smith uses in her Linzer Torte, so I decided to combine the best of both recipes - Delia's pastry and the presentation style from Bake or Break. Traditionally, I think Linzer Tortes are usually filled with either redcurrant or raspberry jam, but even Delia seems to have tossed tradition aside, and now uses cranberry jelly, so I had no qualms about using three different jams to fill this version of the recipe. 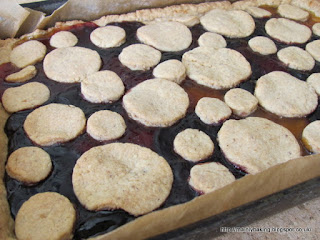 I made 1.5 times the amount of pastry in Delia's recipe, but used a whole egg and some water to bind the dough, rather than 3 egg yolks, as I didn't want egg whites waiting to be  used up. This amount of pastry was enough to line a 12 x 8" (30 x 20cm) tin, after 200g had been put aside for the topping. I raised a shallow wall of pastry along the edges of the tin, just to stop the ram running off, then used 3 varieties of jelly-style jam to spread over the pastry base - redcurrant, apricot and blackberry. The redcurrant and apricot were ends of jars that needed using up, and there wasn't quite enough to use equal amounts of each, unfortunately  - I think the squares would have looked better with less of the darkest jelly. 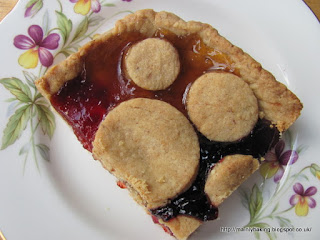 I rolled out the set aside portion of dough and cut out small circles of various sizes, and dotted them over the jam. This was certainly much easier than making a lattice, especially as the dough is fairly soft and can be difficult to work with. The tray was then baked for 35 minutes at 190C, until the pastry was beginning to turn golden brown. After cooling, I cut the pasty into 12 squares, which wasn't easy, as the pastry circles wanted to sink into the jam, rather than yield to the knife!

These made a tasty little treat, although my husband always reminisces about his mother's jam tarts whenever I bake them. She cooked hers at a very high temperature until the jam had cooked to a very sticky  texture, and was quite chewy, rather than still jam-like! I think my pastry would have been burnt before that happened with this recipe.

The bottom of the three photos, a piece taken from a corner of the traybake, was the best picture to show all three colours of jam together, although it's not a good looking piece of pastry!.

Despite these squares not being traditional to Austrian cooking, I am entering them into the Formula 1 Foods challenge on Caroline Makes, which asks us to make something inspired by the country where each stage of the F1 GP season is taking place. This coming weekend the race takes place in Austria - a relatively easy country from which to take inspiration.
Posted by Suelle at 15:22

I like the pastry circles - so pretty. A lovely variation of a Linzer Torte.

Hazelnut pastry sounds lovely - thanks for linking up with Formula 1 Foods!