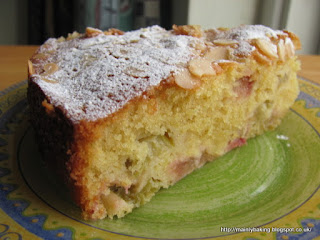 Our rhubarb patch hasn't been as productive as usual this year, and is already showing signs that we won't be harvesting much more. I only needed 400g for this recipe, but had to throw away several stems which were just too tough and woody to use. I think the less prolific growth is probably because last winter wasn't cold enough - rhubarb seems to need a really cold spell to perform at it's best. Although it's not a major problem, and many people say that you shouldn't harvest field rhubarb past the end of June, anyway, it's quite sad to say good-bye to rhubarb for another year!

On the whole, the fruit and vegetable garden isn't doing very well this year - June has been colder than usual, with less sunshine, and nothing is growing very fast. We had good weather at the right time for the apple blossom, though, so I have high hopes for a good harvest later in the year  - at the moment it looks as if we may actually have to thin the fruit, although there's a thing called 'June drop' apparently, so we'll wait a while before deciding whether or not thinning is needed. 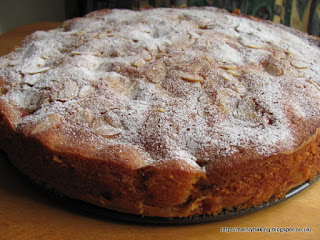 At this time of the year it's good to use recipes which make a little rhubarb go a long way, and this Rhubarb and Orange Cake, from  Good Food, is a recipe I'll be returning to in future. It's very similar to another favourite recipe from Waitrose, for a cake with the same name, but the Waitrose recipe uses less flour and eggs, which results in a denser, more moist cake better suited to a dessert than a cake for the tea table, or coffee time. The Good Food cake was light and very well flavoured, and thanks to a few tips in the comments about the recipe, the fruit didn't sink and it wasn't too moist. 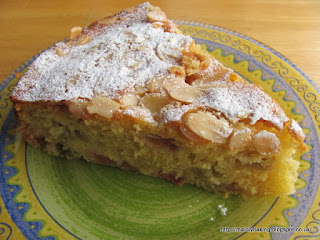 My oranges were quite small so I used the zest from two of them, but the juice of only one (which was 60mls) as I was mindful of the commentators who said they found the cake too moist. (In fact, the cake was a little crumbly when first cut, and I wondered if I had been too mean with the liquid, but the following day it was just right, so I wouldn't increase the liquid!) I also cut the rhubarb stalks into quite thin pieces (about 1cm), as some people found that large pieces of fruit sank to the bottom of the cake.  I used a small proportion of light muscovado sugar in the cake batter (30g with 200g caster), as I didn't have any golden caster sugar. Apart from these small changes I followed the recipe closely. My cake cooked in 60 minutes, and needed covering for the last 20 minutes to prevent over-browning. I would have been happier with a few more flaked almonds on top (I was using the last of a pack), but overall, I'm very pleased with this cake.
Posted by Suelle at 11:18

I simply love this cake!

Love the flavour combination; looks delicious. Our rhubarb isn't as good this year either.

I love rhubarb and recipes like this make me wish I could get my hands on it here in Shanghai. I have never seen it on sale here.