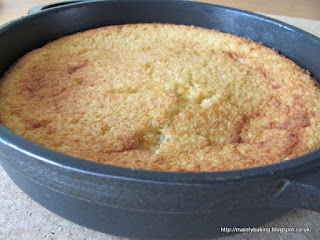 Impossible pies are so called because it's impossible to believe that such a large quantity of very  sloppy cake batter could ever cook into something edible. However, while baking, the mixture separates into layers - a thin dense bottom crust that is very much like pastry, with a custard like layer in the middle that gradually changes to a lighter airy sponge on top. When the impossible pie is a coconut pie, the top becomes golden and crunchy, which is a good contrast to the moist custard layer below. 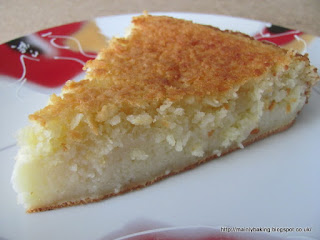 After some discussion about impossible pies (also sometimes called 'magic custard cakes') with other online foodies, I decided to try one out for myself. I used a recipe taken from Sue Lawrence's book 'On Baking', which just mixes all the ingredients together and pours them into a large pie dish before baking for 50 minutes. Some recipes make things a little more complicated by whisking the egg whites separately and folding them into the batter. 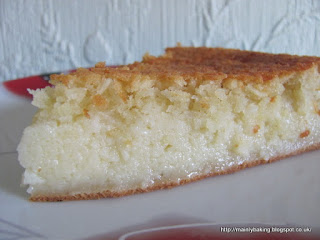 I really didn't expect my husband to like this, as he's doesn't usually like anything that even hints of custard, but he surprised me by saying he thought it was quite good! Perhaps it was the coconut that won him over!

This was so quick and easy to make, using ingredients that any baker keeps to hand, that I think I'll be investigating other recipes for impossible pie soon - I've heard there's a chocolate version!

In the photos of the cut pie, I think you can see how the custard layer gradually becomes lighter and spongy  as you get towards the top.

I've never made one but I used to have a friend who'd bring one to all potlucks. Wonderful!

This looks interesting. I've made a magic chocolate cake, and the it's a similar idea same, and a few weeks ago I made magic nutty squares, again using a similar idea. Love the coconut in the pie, so one to try.

I've often made lemon and chocolate versions but I've never tried a coconut version. Sounds like an excellent idea. I always enjoy making these. I think that's mostly because, even though I know they do work, I still can't quite believe it.