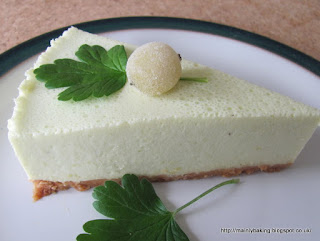 While checking around the garden recently, I noticed how quickly the gooseberries were growing. That reminded me that there were still some of last year's gooseberries in the freezer, which ought to be used before this year's excess fruit went in. So when I needed a dessert to take to lunch with friends, something that could be made with frozen gooseberries seemed the best idea.

The biggest problem with taking desserts to other people is carrying them with no damage. It's also a good idea to take something ready to serve, so you're not doing last minute cooking in someone else's kitchen, or taking up oven space at an inconvenient time. A cold dessert, which was not likely to spill while travelling, seemed ideal and I eventually decided on cheesecake. After looking at several very different recipes, I chose a Mary Berry recipe (from her book 'Ultimate Cake Book') for a set gooseberry and elderflower cheesecake using gelatine. A gelatine based cheesecake could be transported still in the springform tin in which it was made, and the sides removed when ready to serve. 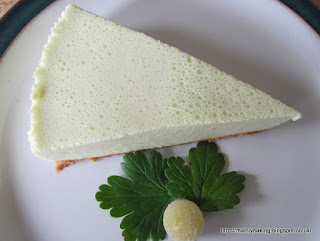 I never like to make an untried recipe for other people, so I had a trial run with the cheesecake the weekend before it was needed.

I adapted the recipe slightly so that I could use leaf gelatine, which I find much easier to use than powdered. I also made a few other changes, such as leaving the sugar out of the biscuit base, using the whole 250g tub of cream cheese, rather than having 25g left over, and leaving off the whipped cream decoration, as extra cream didn't seem necessary for the trial run. All I needed to do, to use leaf gelatine, was to soften nine leaves in cold water, then add them to the sieved gooseberries while the purée was still warm.

As with the rhubarb meringue pie I made recently, the addition of cream to the fruit seemed to mute the flavour. It was good, but decidedly 'delicate', and not as sharp as when using gooseberries in a pie or crumble. The crumb base was thin but this was good, as thick bases can be too hard to cut and eat easily. The set cheesecake mixture had bonded with the base well, so there wasn't any danger of things falling apart. The texture was very light and aerated - very mousse-like - so it didn't really seem like eating a cheesecake at all. 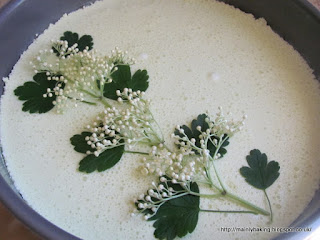 Because I was a little worried about the lack of flavour, I decided to make a tangy gooseberry sauce to eat with the cheesecake when I made it the second time, for those who liked the sharpness of gooseberries. I made this by simmering 550g of gooseberries with 80g of sugar until softened. I strained the juices back into the pan and reduced them by about half, until syrupy, while I sieved the cooked gooseberries to remove the pips. The concentrated juices were stirred back into the purée - more sugar could be added at this stage, to taste, but I decided to leave the sauce quite sharp.

By the time I made the second cheesecake, the elderflowers were almost out, so I decorated the cheesecake with small sprigs of flower buds and gooseberry leaves, rather than whipped cream, and served it with creme fraiche. Unfortunately, as I had to leave it in the springform tin for transportation, I couldn't get a good photo of the second cheesecake.

As the mousse-like texture of this cheesecake relies on beaten egg whites, I'm entering this into Belleau Kitchen's Simply Eggcellent bloggers link-up for June, which is for recipes where free-range eggs feature heavily. Dom hasn't set a theme for this month - anything goes - but a light cheesecake with seasonal fruit is perfect for this time of year.
Posted by Suelle at 18:02

beautiful! I love how light and frothy it looks. I tend to shy away from gelatine but it really does look good. Also reminds me that I have some purple gooseberries in the freezer too! Lovely entry for Simply Eggcellent, thank you x