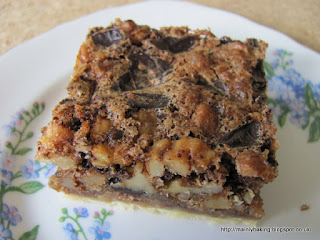 I decided that Butter Tarts would be my contribution to the next Formula 1 Foods challenge. Caroline, at Caroline Makes, has challenged participants to cook something inspired by the location of each race of the F1 Grand Prix season. This year, the Canadian race, held in Montreal, takes place on the first weekend in June.  Having spent a few days in Montreal, at the end of a tour of Nova Scotia and the Eastern Canadian coast, I know that maple syrup is used in many dishes in that region, both sweet and savoury. This is what made me decide on Butter Tarts rather than that other well known Canadian traybake, Nanaimo Bars, which have their origins in Western Canada.

Butter Tarts are traditionally filled with raisins and a butter/egg/corn syrup mixture which sets like a custard when baked, but there are lots of versions of the recipe around using nuts as well as raisins, adding chocolate or coconut, and using maple syrup instead of corn syrup. I was delighted to find, while researching recipes, that Canadian Butter Tarts could be made as a traybake; as one recipe said - all of the flavour with none of the fiddle! That sounded just the sort of recipe for me. 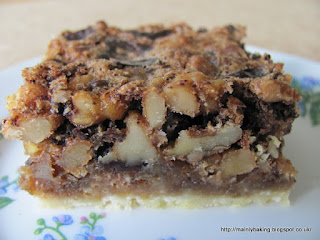 Once I'd decided to use maple syrup, and make a traybake version of butter tarts, it didn't take me long to come across Anna Olson's recipe for Maple Pecan Chocolate Squares. This was fortuitous, as Anna is a Canadian celebrity TV cook, perhaps best known for her baking recipes, so most appropriate for this challenge. I followed her recipe exactly, although I had to use walnuts instead of pecans (showing my support for the British drivers, is one way to look at it!).

I liked the deep filling on these squares, but I thought the base was a little too thin. In places the filling had seeped through the shortbread base, although that might have been because I didn't realise the significance of cooling the cooked base properly before pouring on the filling. If it had been really cold it might have resisted the liquid poured on top. However, if I were to make these again, I would make a thicker base - say half as much again of the shortbread mix. I would also like to try a version without chocolate - the walnuts stood out as a dominant ingredient but the chocolate overwhelmed the flavour of the maple syrup. 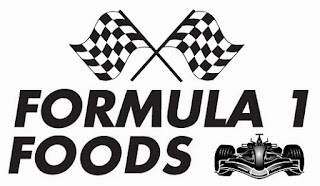 These squares need refrigerating, but are best allowed to warm up at room temperature for 20 minutes or so before you eat them, to get the best flavour. More than that and they become too soft and difficult to handle - something else that might be remedied with a thicker base.
Posted by Suelle at 09:52

I think these look brilliant - the thin base might make them tricky to eat but those proportions look like just my cup of tea!

Mmm these look gorgeous, all sticky and syrupy - thanks for sharing with Formula 1 Foods!