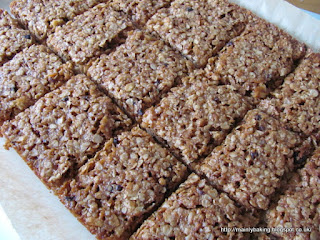 This recipe was devised to use up a carton of Jordan's 'Country Crisp with Raspberries'  breakfast cereal. The cereal is made up of clusters of oats and barley flakes, stuck together with sugar and palm oil and flavoured with small quantities of dried raspberries, hazelnuts and coconut. It's very tasty, and very calorific if you eat the recommended portion size, but unfortunately my husband didn't find it as filling as his usual brands of granola and muesli. Never one to waste food, flapjacks seemed a good use of what was left after he'd tried it for a few days.

I adapted my usual flapjack recipe, reducing the amount of  butter, sugar and syrup used to allow for the fat and sugar already in the cereal, and adding rolled oats for substance and a little more coconut for flavour. I also threw in the remains of a pack of white chocolate chips, just to use them up! 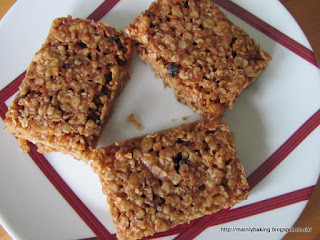 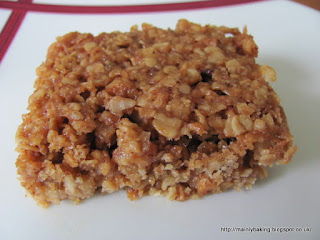 Melt the butter, syrup and sugar together in a large bowl in the microwave, or a saucepan on the hob, then mix in the other ingredients. Spread evenly into a 30 x 20cm (12 x 8") baking tin, lined with baking parchment, and press down firmly. Bake at 180C for 30 minutes. Cool for 10 minutes, then mark into bars with a heavy knife (I get 18 pieces out of this size of tin, but you may prefer smaller bars). Leave in the baking tin until completely cold before cutting into pieces, and storing in an airtight tin.

These flapjacks were light and crunchy, as I think some of the cereal is puffed during the manufacturing process.  This crunchiness made them harder than those I usually make, but it's nice to have an occasional change from chewy flapjacks. Although there was only a small percentage of dried raspberries (2.5%) in the cereal, their flavour was noticeable, and complimented the coconut well. 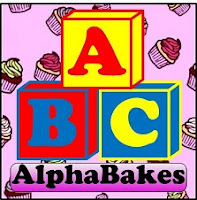 The AlphaBakes challenge,  hosted by Caroline at Caroline Makes, and Ros at The More Than Occasional Baker, is to make something whose name, or principal ingredient begins with a randomly chosen letter of the alphabet.

This month the challenge is hosted by Caroline, and the chosen letter is O, so I'm entering these flapjacks because they contain OATS.

They look delicious!
We often get over enthusiastic about muesli and then get fed up with chomping our way through it when the packet is still half full. This is a good way to use it up!

a clever idea to use up the cereal. they look wonderfully chewy!

This would be great for when you are on the go in the morning - assuming you bake it ahead of course! Thanks for sharing with Alphabakes.

I have a large bag of Jordan's muesli so I think flapjacks are in order. Love how you've managed to create something else from leftovers. Thanks for entering AlphaBakes.