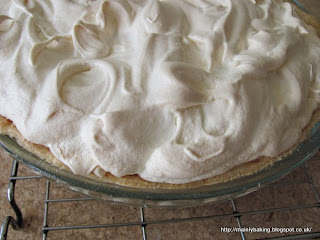 It was only after making this dessert that I realised it was somewhat similar to Delia Smith's recipe. I hadn't knowingly read Delia's recipe beforehand - perhaps it just a case of great minds thinking alike (ha ha!). It was an idea that had been  in the back of my mind for a while but it wasn't until I had some double cream leftover from something else that I finally got round to trying it.

The filling was 500g chopped rhubarb cooked to a pulp with 80g sugar. Once it was cool, I mixed in 2 egg yolks and 100mls double cream. This was poured into a pre-cooked shortcrust pie case and cooked for 20 minutes at 170C. 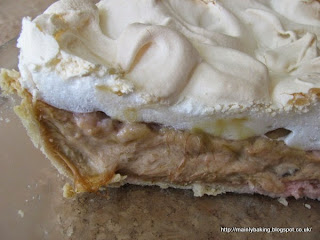 I made half a batch of this meringue mixture from the two egg whites, spread it over the pie filling and baked for a further 15 minutes, until the meringue was beginning to colour.

The pie filling was quite soft at room temperature, although it firmed up more after chilling. I think, for this quantity of fruit and cream, 3 egg yolks would have been better. Three egg whites would have made a better quantity of meringue too.

Using cream in the filling muted the flavour of the rhubarb quite a bit. I think if I made this again I would try Delia's method of thickening the filling with cornflour, and leaving the rhubarb in pieces rather than cooking it to a purée. Despite my criticism of the taste, this made a nice change from the crumble I usually make when we want a weekend dessert.
Posted by Suelle at 21:26

It looks very nice! I like lemon meringue and variations.

I really enjoy rhubarb and I'm definitely in favour of a meringue topping. In fact, I'm not too sure that it's possible to have too much meringue topping. My wife has a bit of a crumble addiction so this would make a very fine change.

I like meringue topping with rhubarb. The filling is different - adding the cream and egg yolks. Must try it.

I love the filling in the tart. A great addition to plain rhubarb which I usually use. It looks very moreish.

I love the filling in this tart - very different from the usual just rhubarb.